ALL INDIA BANK EMPLOYEES ASSOCIATION is a unique trade union organisation in the comity of trade unions in the financial sector in particular and middle class organizations in general in our country. It is studded with achievements right from...Read More

ALL INDIA BANK EMPLOYEES ASSOCIATION is a unique trade union organisation in the comity of trade unions in the financial sector in particular and middle class organizations in general in our country. It is studded with achievements right from its inception.

Birth of AIBEA itself an achievement: The very starting of AIBEA in 1946 was itself an achievement because in those days, starting a union in the banks was extremely risky when bank managements were highly vindictive to such ideas and actions. There were no rules and regulations to protect the bank employees. Most of the bank staff were taken in the banks on the basis of some recommendations of some highly placed persons well-known to the bank managements. Hence the employees were invariably obliged to the bank managers or higher officials. Their jobs were at the mercy of these authorities. Even though the employees were suffering from slavery service conditions and very poor wages, they were afraid of opening their mouth. Even a whisper against the management was enough to get the marching orders. Hence in these unbelievably adverse conditions of exploitation, the idea of forming a union was unthinkable. But yet, it happened. Some daring young employees took the courage and lead and formed unions here and there and many of them were victimised. All these did not deter some employees who not only felt that something should be done but envision that all India unity of employees would be required to fight these inhuman and unfair attitudes of the managements. Thus the birth of AIBEA in 1946 was in itself a great achievement.

Looking beyond the nose - another achievement : When those few bank employees met in Calcutta to form trade union, their plight was so miserable that their survival and sustenance was at stake. But they not only talked about their problems and to mitigate it, but had the vision to talk about the freedom of the country, condition of the banks, etc. This social consciousness was thus in the embryo of AIBEA. This was another great achievement of AIBEA.

Swiftly moved into action: The birth of AIBEA not only signified that bank employees were willing to come together but their determination to face the offensives. With very little strength at that time, AIBEA still moved into action in placing charter of demands and going to the streets.

Patience but perseverance : Things did not move so easily. Sen Award came in 1948 but that was nullified at the instance of the bankers. Divatia Tribunal was appointed but AIBEA objected to him and so he was forced to resign. Then came the Satry Award but this resulted in wage cut. LAT Award followed and gave relief to the employees but Nehru Government unilaterally modified it. That was 1954. Thus 6 years AIBEA was patiently pursuing the issues from one tribunal to another.

23rd September, 1954 - 1st All India Strike by AIBEA:AIBA could no longer remain silent. Even at such a nascent stage, AIBEA gave the All India strike call and that was a roaring success. It was another unique achievement.

1964 - No more tribunals, we want Bipartite and AIBEA achieved it : When AIBEA demanded direct negotiations and collective bargaining machinery, everyone was skeptical. But AIBEA achieved the first ever bipartite industry wise settlement in 1966, unheard of in our country at that time. Thus AIBEA became the pace setter. We want nationalisation of banks in people's interest : Simultaneously, AIBEA also demanded nationalisation of banks which were then in the hands of powerful capitalists of our country. Within 5 years, AIBEA achieved this in 1969. Unique achievement indeed.

1979 - 3rd BP Settlement - a great victory against Morarji Desai Government: When Government wanted wage freeze and imposition of Boothalingam Committee DA formula, AIBEA built up a powerful agitation and succeeded in preventing the retrograde DA scheme to be imposed on bank employees. Another wonderful achievement.

1981 - AIOBA was founded : Looking to the need to mobilise the officers on proper trade union lines, AIBOA was founded.

1985 - Massive morcha to Parliament: AIBEA mobilised 40,000 bank employees to participate in the Parliament morcha and made an unprecedented success to focus the pitfalls of banking policies and demanded corrective measures.

1989 - 5th Bipartite Settlement - Ceiling on DA removed. In this Settlement, AIBEA succeeded in removing the ceiling on DA and DA was achieved on entire Basic pay without any cap.

1993 - Take the bull by the horn - Computer Settlement signed: When technology wave came in like a tsunami in the banks, AIBEA faced it and safeguarded the jobs of the employees. It was a historic achievement of AIBEA.

1993 - Pension Settlement signed - From cradle beyond graveyard: Another marvelous achievement of AIBEA was the signing of the pension Settlement. Lacs and lacs of bank employees could cover themselves and their family with this social security scheme.

1995 - 6th Bipartite Settlement and Relativity Settlement: This was another unforgettable achievement. When IBA tried to distort the relativity in wages between employees and officers, AIBEA fought back and established its capability. Relativity was restored.

2000 - 7th Bipartite Settlement : One more wage settlement was achieved by AIBEA and secured substantial increase in salary of employees.

2002 - Settlement on Procedure for disciplinary action: A revised Settlement was achieved without diluting any provision and further improving the job security.

2005 : 8th BP Settlement was signed : In this Settlement, AIBEA achieved the benefit of 100% nutralisation in DA for all employees and officers.

2015: 10th BP Settlement - another advancement in service conditions: Full reimbursement in medical expenses achieved. AIBEA has now entered its 70th year of glorious existence. On the one hand, achieving betterment in wages and service conditions. On the other hand, continuous struggles in Defence of public sector banking. Due to its struggles, bank privatisation has been averted till today. AIBEA is today fiercely fighting the menace of increasing bad loans.

Dear comrades To Complete the Bank Flag Subscription Process, Please remit in the following account the subscription amount of Rs.80/- for 36 monthly issues by NEFT and then click the SUBSCRIBE Button Below to proceed for filling up the subscription details, including the UTR Number.

As all the fields are mandatory in subscription form so subscription Completes only after filling all the details and clicking submit button in the form.

If any, by filling up the details below 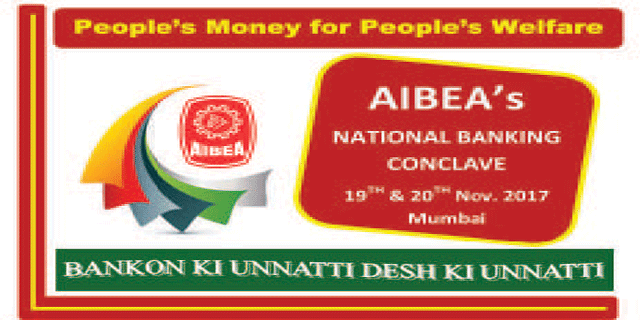 and copy to the Mobile device